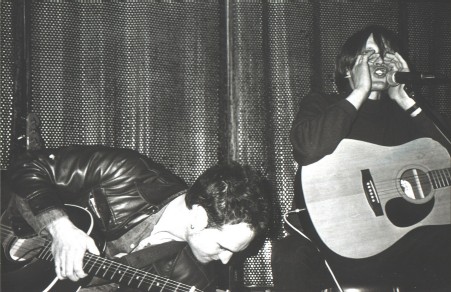 ROLEX TWINZ was a cross-cultural instrumental duo featuring guitarists JG Everest (Lateduster, Neotropic) and Eduard Nesterenko (Petlya Nesterova, Happy Birthday). Everest and Nesterenko first met at the legendary TamTam Klub in St Petersburg, Russia, in 1994 when James attended a gig by Edik’s band “Happy Birthday”.  The two quickly became good friends and began collaborating almost immediately, sharing and exploring their divergent approaches to songwriting, performance, production, and improvisation. They first performed together at the Ten Klub in St Petersburg in May 1994.  In subsequent reunions in 1999, 2000, and 2003, they played additional performances at Tretei Put in Moscow, and Fish Fabrique and Griboedov in St Petersburg.

Edik passed away in 2008 at the age of 46, from stomach cancer. He was a dear friend and had a profound influence on my life and how I see and relate to the world.